The new sports site launch I’ve been working on has been delayed and has garnered most of my time in recent weeks, but I am hopeful it will be up and running in the very near future.

I’ve been very busy from the content creation and strategy angle, blending together with newspaper-style reporting, blogging, the employment of social media and multimedia components and SEO. I’ve also been working on e-mail marketing and busieness model ideas, and planning out the next phases of where we want to go after the launch.

Now it’s down to a Web developer and my business partner giving it the look and functionality we’ve been planning for months.

Taking such a long break from posting here is not what I anticipated, but I’ve been finding some good links to keep me focused on my primary task, and I thought I’d share them here while I’ve got a brief break in my schedule:

• Liberate Your Life: Put Yourself on Auto-Response:

“Putting yourself on auto-response means silencing your practical mind, in the face of the seemingly unpractical and ridiculous ideas. Faced with liberating your life, instead of thinking ‘I don’t know where to start,’ your auto-response becomes ‘I’ll figure it out.’ ”

I haven’t worried about plunging into something — the deep end — for a couple of years. But it’s especially important to think this way when you’re outside of an institution that is the embodiment of reticence and caution.

Every day as I work on my project, I tell myself over and over, “Nobody’s doing anything quite like this.” There is no other template except to carry on.

• random thoughts on being an entrepreneur:

“Once you become an entrepreneur, you find the company of non-entrepreneurs a lot harder to be around. You’ve seen things they haven’t; the wavelengths alter, it’s that simple.”

I’m not quite there — not yet. I still think of myself as a “bootstrapper,” but the entrepreneurial mindset is starting to take hold. Surrounding myself with self-directed people has been indispensable for me as I slog along, getting the concept for this site into the shape we have in mind.

“I am not a new-media person dumping on old media. I am an old-media person who wants to look at the present and the future through clear eyes, not through a lens of nostalgia.”

This was written by veteran newspaper editor Steve Buttry right before he left newspapers to plunge into the world of online journalism. Upon his move, Buttry’s wife, a journalist in her own right, penned this exquisite tribute to him, including this painful summation of a stagnant industry that has created a large and growing diaspora:

• “Did it ever occur to you that even the most deathless love could wear out?”

“The people who run newspapers and those who work for them are engaged in useless foreplay. They cling tightly, trying again and again to make the way they’ve always done it still work, but the passion is gone. They talk change: tearing down silos, building audience and monetizing content. But talk is their only capability. They eye non-profit status with government subsidies like it’s Viagra for print. They tussle through regrouping, ‘right-sizing,’ and stripping down to ‘lean and mean.’ They reorganize, then reorganize again, then grope their way back to same old position that no longer works. The wretched gyrations are hideously frustrating for the poor souls involved, and sadly fruitless. They give birth to nothing new. The newspaper business is an aging, impotent beast, bringing down a lot of good journalists who are tangled in its foundering arms.”

It’s been a year and a half since I left my newspaper, and those words and phrases are still chilling to hear. “Resizing” was the term that accompanied my buyout offer, and it left me numb.

This piece caught me off-guard emotionally, because I don’t dwell on these thoughts and experiences all that much any more. They serve as a reminder of why I wanted to forge a new identity for myself as a journalist. It’s being carved out, gradually but surely, with nothing but renewed passion as my guide. 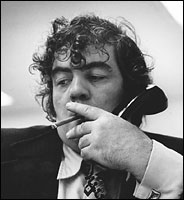